People have always criticized me about my checkmarks. They’d say,

But I’m left-handed. So it’s comfortable for me to write the tail ends of my checkmarks by flicking my wrist towards the left side where my hand is resting. The same way right-handed people do it, just mirrored. Yet most people insist that I should do it the “right” way.

I don’t mind it. I think I used to. But not anymore. After all, we live in a right-handed world. I remember, in grade school, writing on my spring-bound notebook from right to left starting from the back.

Someone told me to never EVER write like that because no one would understand it. So I adapted. And that wasn’t the last time. Growing up as a leftie, I learned to adapt to many things. Things that were trivial but…constant.

I learned to sit at the left-most corner of the table when eating at family gatherings. That way, my elbow wouldn’t collide with anyone. I learned not to mention that I’m left-handed to some superstitious relatives who believed that the left hand is evil.

In school, I learned to use a sticky note to cover the edge of my hand when writing so as not to smudge what I had already written as I moved left to right across the page. God help me if I was ever called upfront to write on the whiteboard. I learned that scissors are my greatest enemy and I developed a special ability to hunt down, in a room full of single chairs with foldable desks, that one chair that had its foldable desk on the left side. They were a dying species.

There were many things I needed to adapt to. Some came naturally to me. Like playing the guitar the right-handed way or using a computer mouse with my right hand. Others, I still struggle a lot with.

I once asked my mom if she ever thought about switching my handedness. She mentioned going to a psychologist about it when she first realized I was left-handed, who recommended against it saying it might confuse my brain. So, she didn’t.

Despite all of the struggles I’ve experienced as a left-hander, I’m glad she didn’t. I actually like being left-handed. It’s one of the things that make me unique. Especially when people ask me excitedly,

“OMG are you left-handed?”

The truth is left-handedness occurs in a very small percentage of the population. So if you know any lefties out there, try to be accepting and understanding of their minor (yes), but daily inconveniences. It might not seem like it, but it makes all the difference. 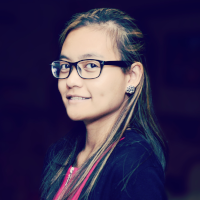 Klarissa Jeiel is your average 23-year-old girl from Canada. Five words that describe her: introverted, curious, passionate, caring, and open-minded. When it comes to hobbies, she’s kind of a jack-of-all-trades. She loves to read books, draw, watch movies and TV shows, edit, write short stories, play the piano, and so much more. As an aspiring law student, she hopes to someday make a good difference (no matter how small) in the lives of those around her and in her wider community.